She looked up from her iPad and smiled coyly when he entered the room. Then she looked down again and pecked at the screen. The corner of her mouth was frozen in a slight smirk.

“Hello, sweetheart. How are you today?”

Dr. Jonathan Finlay was Jordan’s neuro-oncologist from the very beginning of the journey. In fact, he was the one who delivered the fateful cancer diagnosis to us back in 2004. He has guided every decision we have made over more than a decade of treatments. His grey-bearded face is perpetually smiling. His eyes cast a twinkle behind scholarly glasses. He’s an optimist despite being British. The smooth lilt of his English accent only adds to his charming blend of hope.

Jordan loves Dr. Finlay. She was as sad as we were when he left Children’s Hospital last year to take up a new post in Cleveland. He still monitors Jordan’s progress, though. He says she is his patient for life.

I choose this encounter between Dr. Finlay and Jordan a few years ago because it was prophetic.

On that day, Dr. Finlay’s “glass is half full” demeanor was even more enthusiastic than usual. The scans from an MRI of Jordan’s brain and spine looked very good.The tumor was not only stable, it might have gotten smaller. Jeanette and I sighed with relief while Jordan kept her focus on an iPad game of mahjong.

With worries about the tumor’s progress out of the way, our conversation with Dr. Finlay switched to quality of life. How was Jordan doing otherwise, he asked.

Without looking up from her screen, Jordan said, “I really want to read.”

Finlay looked over at us and we explained that Jordan had been working harder at school on her reading skills, but she was still struggling. She did well with some sight words like “the” and “and,” but she couldn’t grasp the basic code that you and I use to translate clusters of letters into words. A lot of what she called reading was guessing, and it frustrated her. She would sit in her room leafing through piles of books imagining what they said. She loved it when Jeanette or I read to her, and her comprehension was very strong, but she really wanted to read on her own.

Finlay talked with Jordan for a bit, asking her questions about her attempts. He empathized with her desire to read, and encouraged her to keep trying. And then he told her not to give up. The brain, he said, is an amazing part of the body that often “rewires itself.” In other words, many patients with brain tumors lose cognitive abilities only to find new ways of coping. The biology of the brain can quite literally change as our mind attempts other ways to do something it did before but couldn’t do the same way now.

Dr. Finlay’s prediction has come true, although not in the way we imagined. Jordan has become wonderfully creative and resourceful when it comes to communicating outside of normal speech. Her iPhone and iPad are her gateway.

There are a number of apps available to help people with disabilities. In fact, there are some really impressive features built-in to iOS. But Jordan doesn’t rely much on these. She uses the tools you and I take for granted to sidestep a need for writing and reading words.

For example, yesterday I received a text message with an audio file attachment. When I listened there was Jordan’s voice saying hello and wishing me a happy day. She couldn’t type the words, but she found a clever way to text with me. I recorded a brief audio message back. Shortly after came a happy face in reply.

She uses emoticons more and more. Here’s one she sent me recently when she wanted to let me know it was time for me to come up and tuck her in.

Her phone’s camera is a particularly clever part of her communications repertoire. She takes photos of things she likes, just like you and me. But she also uses the camera to send messages. The photo below was sent to me last weekend. When she was downstairs with me, she asked if I would help her tie the drawstring on her lounge pants because she has trouble with it. Then she went upstairs to get ready for the day. About 10 minutes later this photo came through—a signal that she was ready for me to help her. She often uses photos in this way. 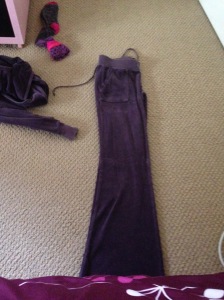 And, she has mastered some basic words and letter codes. The most vital text she relies on is a 2-letter pair: SZ. It’s her signal that she feels a seizure coming. She often gets it backwards, but ZS works just as well for Jeanette and I. These two letters have created an efficient shorthand for all of us and allows us to keep Jordan safe.

All of these compensating uses of her phone were developed by Jordan, and great proof that Dr. Finlay was right about the desire of the mind to find “another way.” It’s also proof of The Slayer’s greatest quality: her tenacity. She views an obstacle as something to work around. She does this with compelling resolve. She loves to tell me that she never gives up. And she never has.

This site uses Akismet to reduce spam. Learn how your comment data is processed.